Okay so the results of round one are in.

Donald Trump scored 18% of the vote with a total of 2 votes
Dave Murphy scored 0% and is eliminated
Mike "Health Ranger" Adams scored 18% with 2 votes
Boris Johnson got 18% with 2 votes
Andrew Wakefield is the current leader with 36%, 4 votes
Keith Thompson scored 9% with a single vote

So who do you want to win? Get your votes in, tell your parents and friends, get your cat to vote. As things stand it's not going to take too much to get your choice into the number one spot.

Don't know who to vote for? Check out the nomination posts:

Prolescum said:
I humbly submit Donald Trump for his views on mental health and vaccines. Also, climate change and his feelings on the EPA. He's apparently not fond of Planned Parenthood or the ACA. Imagine, he's barely months from the White House! :lol:
Click to expand...

Dustnite said:
I'm going with the "Health Ranger" Mike Adams. There's something about anti-vaxxers that draws a visceral response from me... He runs probably the #1 anti science website on the net:


This video has everything from woo to Nazis, hits all the top 10 quack points! Did I mention he's an AIDS denialist? I'll take my trophy now...
Click to expand...

Rando said:
I know how low brow it is to pick an obvious candidate but I nominate Andrew Wakefield. He is directing a "documentary" based on his lies, and it is going to get a dvd release. I think he's relevant because it's 2016 and he is still peddling his lies to anyone who will listen and judging by it's viewer count it is getting attention.


The "Health Ranger" is bad but he is merely a carrier of the disease of ignorance, Wakefield is patient zero. This disease has a body count, Wakefield's crap is killing people and he doesn't care so long as he keeps making money and getting press.
Click to expand...

he_who_is_nobody said:
I am going to nominate the Trump of the U.K., Boris Johnson.
Click to expand...

MarsCydonia said:
I would nominate Keith Thompson of Reformed Apologetics Ministries, a slavery and genocide apologist, director of the Atheists don't exist youtube "documentary" who has offered us this year yet another "brilliant" piece of documentary film making:

Darwinism's Downfall
Filled with the usual misquotes and misinterpretations of evolutionary science and geology (such as "macro-evolution has never been proven") and the usual "Evolution leads to Nazism" scare among others.

Please explain and debate your choice below.

My vote is for Boris Johnson.

Let's face it these are the only circumstances in which I would vote for that buffoon.

So he banged the drum about Brexit for months, convincing people that leaving the EU would somehow make Britain great again (there seems to be a bit of a theme with that lately) and then he stepped back from the ensuing leadership race that most of us thought was a incredibly stupid and dangerous proxy for a Tory leadership contest. But no, Boris was content to set fire to the ship and duck out. Only for us to find out that Theresa May has got him in as fucking Secretary of State for Foreign and Commonwealth Affairs! The man who said the following: 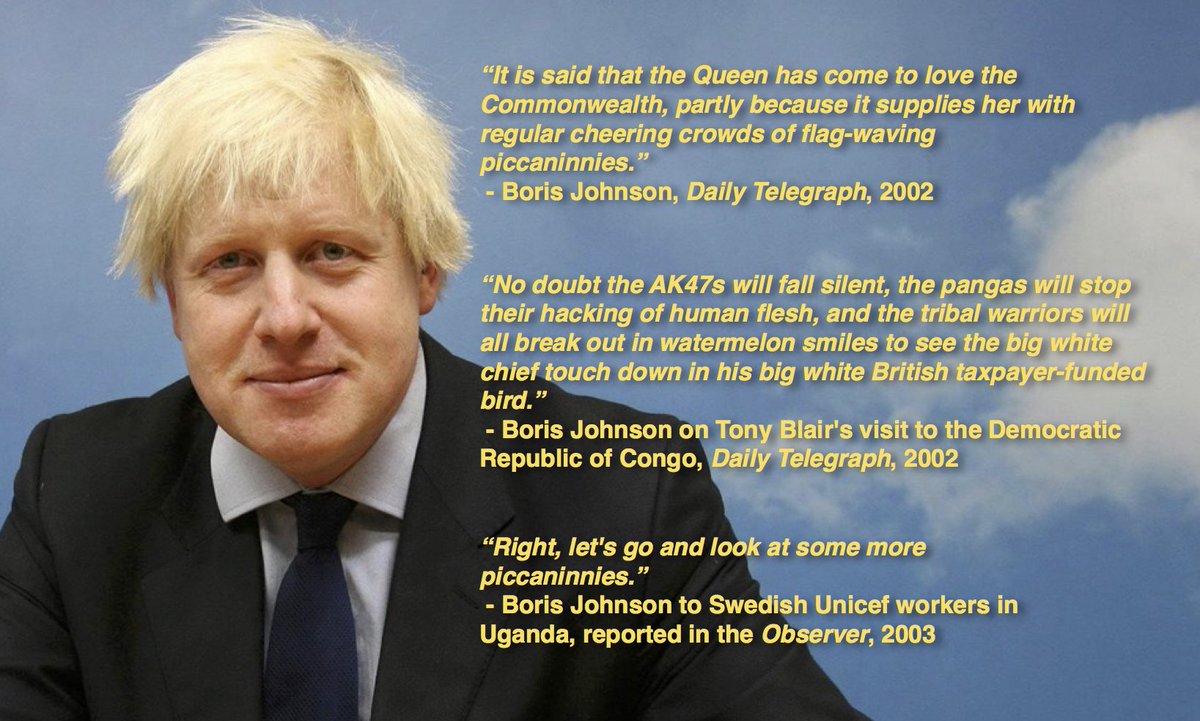 Brexit was a complete fucking disaster. All of the major campaign promises were broken within the next morning. We are now subject to a coup of the extreme right of the Tory party and we're going to suffer for it, in very real ways that affect our day to day lives in the UK.

My vote goes to Boris Johnson because Jeremy Clarkson has been a better foreign secretary so far than him.

Boris Johnson. How the hell did he become a foreign secretary?

oh wait. The witch is back.

Again, voting for Andrew Wakefield for being an evil human being.

Voting for Andrew Wakefield. Just had someone in the family blame the MMR vaccine for giving their child autism and the child never got vaccinated for MMR.... I mean holy shit...

EDIT: I should add all my extended family lives in a Mennonite commune in Montana, so they are super religious nuts. This came from one of my cousins that "escaped" the commune but still fall into the trap of woo. Also, I'm not going to start a facebook war about how his child got autism by osmosis from a vaccination the kid never received.
G

Wakefield. His idiocy can kill.
M

Well Keith Thompson was my pick so I'll pick him this round.

Other nominees may be dangerously deluded or misinformed but I am under the impression that Keith Thompson willfully deluding or misinforming despite having having the possibility of knowing better.

And on another note, slavery and genocide apologetics? That gets my vote as quack and disgusting human being both.
D

I realise it might be a bit late to do so but I'd like - if possible - to add a new candidate:

John Lott is a fraud - he of the "more guns, less crime" claim.

He has my vote.

I actually voted against my earlier preference as I don't believe Donald Trump will retain any authority come November (in either case). Andrew Wakefield because he now profits from his disastrous legacy.
You must log in or register to reply here.
Share:
Facebook Twitter Reddit Pinterest Tumblr WhatsApp Email Link
Top