This was a discussion-turned-argument I had on Facebook yesterday and this morning. I haven't actually seen this person for at least a couple of years, so I was quite shocked to see a wall post claiming he hated "Pakis".
I initially wanted to probe around gently to try and see why he said that and perhaps, after a lengthy discussion, bring him round. Were this a complete stranger I perhaps would have been more aggressive in my approach, but when I saw him frequently I valued his friendship, so I wanted to keep relations intact. As you can see, this failed immediately and went downhill from there: (NOTE: you might have to click on the image if it's too small to read the writing on here. Names have been removed from other peoples' comments and post) 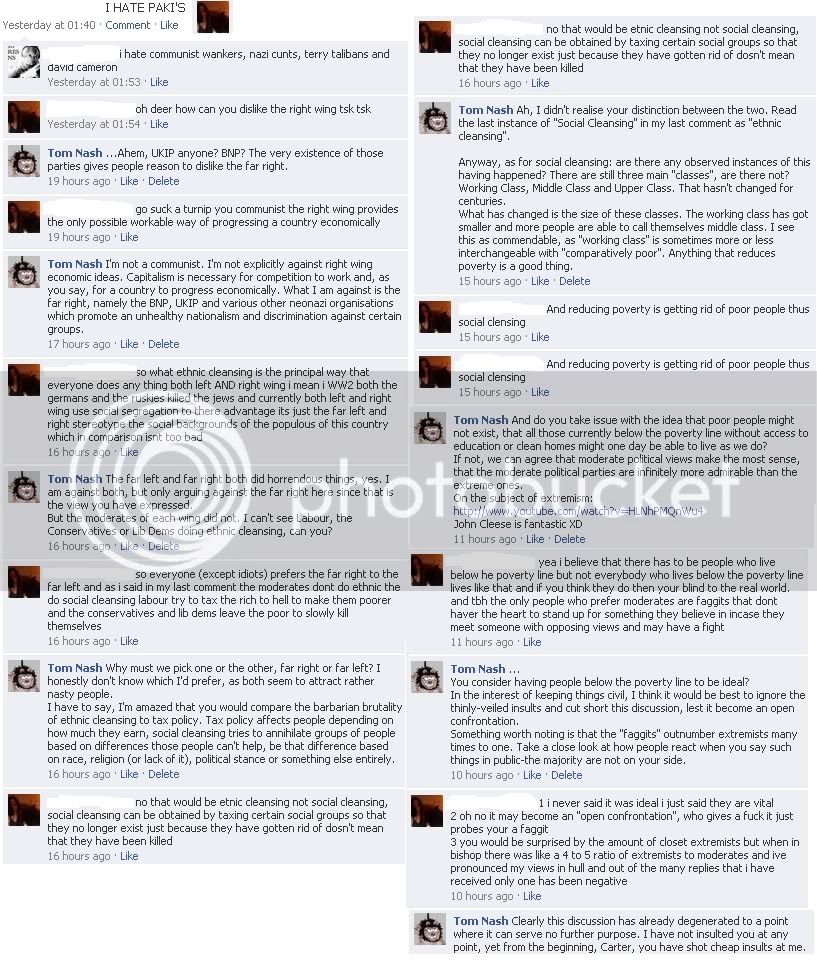 I saw this pop up on my facebook, so I checked out the guys profile.

His politic views are 'Norse'?

More on topic, I skim read the whole thing and got the impression that you were fighting a lost cause. Some people are either too dense or arrogant to be reasoned with.

Shockingly, people with right-wing views are also very often giant assholes. I know it comes as a surprise to many people, but when your political views include that idea that it is ideal and necessary for some people to live in abject poverty so that other people can be fabulously wealthy, you probably have a generally broken personality.
D

I have lost three friends from high school that I re-established friendships with on Facebook for the horrible sin of posting links exposing the hypocrisy/idiocy/racism/etc. of Tea Party-types. I do not dislike them for being Tea Party suppoorters, but they cannot seem to extend the same courtesy to me. Funny how that works.

You are friends with this person?

If this is what passes for deep intellectualism in this person's world, then why bother keeping the pretense of friendship. Unless you plan to use this person as a meat shield in the looming zombie apocalypse..
G

Fuck him. Right off the bat he insults you and falls back on the much parroted insult of "communist" as soon as you tried to reason with him. Unfortunately, I've had similar experiences with friends both online and real life. The funny thing is that I never started those fights, it's always started with someone ranting about "lefties" ruining the country so I HAD to say something to that. It sucks living in conservative Orange County, California.

I would've said one thing: I hate Paki's what? Literacy?
C

More important: how exactly did you become friends with that guy?
N

I've known him since I was eleven. Then in the last few years he became quite eccentric, started leaning to the very far right, became a teenage father, got arrested etc... :/ Haven't seen him at all for months now.

EDIT: I would make a quick point that my views nowadays are probably slightly further to the left than the ones I touched upon in that Facebook argument. Still staunchly moderate, but increasingly of the opinion that excessively rich people (ie: those who earn several million per year) should be taxed far more than they are. It is not right to deny funding to healthcare, schools, research institutions, social services etc while individuals hoard more money than they could ever spend. Oh, and we should scrap several aspects of our military, particularly our nuclear arsenal.