Status
Not open for further replies.


ThePuppyTurtle said:
According to the Hovind theory, The Flood was started when a meteor Struck through the Earth, Shattering the Ice Canopy, the meteor then hit the Earth and started the Crack that begins the Hydro-plate process.
Click to expand...

It would have been nice if you had explained this - Once again, though, it's regrettably bad that Hovind tried to write off X Rays as the source of aging -
But you didn't present this fact.

ThePuppyTurtle said:
Your Article regarding X-Rays Speaks of REFRACTION not BLOCKING.
Click to expand...

If you knew the first thing about what you were talking about, if something is refracted enough it is, basically, absorbed... As explained in that link on basic mathematics of refraction. Eventually, it wouldn't matter since the index would have proceeded to gradual-zero.

Round to the millionth decimal point, and it would be zero.

ThePuppyTurtle said:
And we must consider the intensity of the Rays. X-rays would be weakened by the magnetic field and the canopy would finish them off.
Click to expand...

The Magnetic field certainly does weaken them, but only so much Puppy. I can fire a UHF radio frequency into space, and get past the Earth's Magnetic field. I could bounce a laser off the moon and back, with the right equipment.

Oh, and how could I forget - a field as large as this canopy would have been would not have only halted waves from entering the planet... But also from leaving. It's a two-way process, really. The Magnetism would have been severely altered due to the state of this large canopy, like the X-Rays and light would be.

ThePuppyTurtle said:
I Explained Pressure Regarding the Animals inside Noah's Ark. And nothing I've said violates the Laws of physics. You seem to exist in [Reality] where all Reactions in physics are instantaneous. But where I live, [I] have this thing [that I have no clue about it's relation to Physics] called Time. It has to pass for [some] things to happen.
Click to expand...

*Facepalm*
1) We're talking about the entire planet - not just Noah's Ark. Unless his Ark was an air-tight chamber. And, even then, the monserous beings would have died from air expanding in their blood vessels caused by a decrease of pressure (as anyone who has had the utter displeasure of ascending from a high-pressure area [such as, below water pressure] to the surface would know as the Bends) and croaked.)

2) Physics is always occuring. No object stops moving. The Laws of Nature are, indeed, instantanious in their occurance - because Nature never stops. It doesn't sit on the sidelines and twiddle it's thumbs for you. This is the actual CORNERSTONE concept of Physics (the study of matter and energy, and of interactions between the two) - if you had any knowledge on the subject, you would have known this. Physics is the most pure form of science we have, almost as precise as Mathematics.
Atoms are always in Constant Motion. A pressure when released into a vacuum would explode. All gasses, when pressure is releaved on them in ANY format, expand. Basic Elementary concepts, these are. In any Physics class, they are in the second or third chapter.
We can outline the exact numbers, and tell you with almost realistic precision what the outcome of an event involving matter and energy will entail for the matter and energy involved. Gravity. Motion. Mass. Quantum Mechanics. Basic foundational principles upon which all scientific processes and calculations are derrived. Nothing pauses (unless when an object in motion reaches a terminal change in velocity - but that is, realistically, only for an instant before it shifts velocity... But that's irrelevant), nothing diddles around, nothing halts.
Physics is, indeed, the backbone of science - and it doesn't agree with any part of your theories.

ThePuppyTurtle said:
(After your next post, You can have the first opening statement if you want it.)
Click to expand...

I've always been astonished by the ability of some truly intelligent people to pursue for a long a logical study of facts, A well reasoned line of inquiry only to see the unpleasant light at the end of the tunnel, and instantly shout "NONONO THAT CAN'T BE TRUE NO NO THAT HAS TO BE WRONG NOOOO". This Condition Called Denialism, afflicts Billions Worldwide. Here's a Few Examples

We take the side of Science, In spite of the patent absurdity of some of its constructs, in spite of its failure to fulfill many of its extravagant promises of Health and life, in spite of the tolerance of the scientific Community for Unsubstantiated just-so Stories, because we have a prior Commitment, a Commitment to Materialism. It is not that the methods and institutions of science somehow compel us to accept a Material Explanation for the phenomenal world, but, on the contrary, that we are forced By our a priory adherence to material Causes, to create an Apparatus of investigation and set of Concepts that Produce Material Explanations, no-matter how Counter-intuitive, no-matter how mystifying to the uninitiated. Moreover that Materialism is Absolute, for we cannot allow a Devine foot in the Door. - Richard Lewontin, Evolutionary Biologist.

Such Closed-minded Denialism, is the greatest enemy of Knowledge. In order for science to Progress, We must stop systematically Ruling out all Claims that contradict the current Knowledge, beliefs and, Paradigms for Emotional Reasons. But that seems to be what science has become. Biology has Gone from the Study of Life, to the study of Death. And the Minds of the Public are following in its footsteps. May God Help us All.
O

The Scientific Method - the method that has gained us everything that (even up to 15 years ago) seemed utterly impossible. A dream. A phantasm.

Man? Fly? Preposterous! Only Angels and birds can fly.
Live 60 years? Insanity! 80 years? MADNESS!
Cure plagues? Only God and His Chosen can cure plagues.
Space? The Moon? Get those ideas out of your head.
I could go on and on for hours about the things that Science has brought us through it's processes and the hours of labor of it's practitioners, studying for years to further both our understanding of the universe and progressing the state of life for all of us, collectively. As a whole.

Since the dawn of man, we have dreamed these things - these impossible, unimaginable things - and have ever since been driven to better ourselves. But, only recently we have been able to capture these fantastic dreams. The things that were once acts of God can now be reproduced in a lab. We have studied nature, and found that it is even more wondrous and complex than we could have ever imagined...

Science has gained us more progress than we could have ever imagined. Hell, this conversation is a marvel of the scientific process!


The Scientific Process has definite definitions. An approach to how we should define things. It is very strict, and universal for all things. Among these, the definition of Theory.
A Theory is a conclusion drawn based upon the collective evidence. Evidence is all collective facts and data.

No Creationist has ever presented a scientific explanation that fits all of the facts, data that we have. Just, as my opponent would happily call it, denial of them all. They criticize the Scientific Method for not including their "Theories" - but, in truth, it is because it is excluded like every other idea that does not meet the criteria. The same criteria that every other theory must meet.
They present nothing but uneducated critique, and either intentionally or unintentionally spread misinformation, lie, and complain when they are not recognized for all of their effort into trying to punch a hole in the scientific method that has built the very house which they lay their heads at night, powered by nuclear energy, who can be assured of clean water, good food, and all the other things that are results of the very same criteria that will not allow their absurd and irrational ideas into the Scientific Process.

And, moreover, this discussion has revealed the truth of the matter:
As long as there are people devoted to the betterment of mankind, it really doesn't matter. At the end of the day, the world roles on. Your opinions on the matter will not halt the actual process of Science. It will not stop the development of technology, or the study of the Universe. Because, as I said before, Science doesn't require your uneducated opinions to forge forth. It does not require your beliefs for you to benefit from it.

I shall close with my favorite XKCD comic strip: 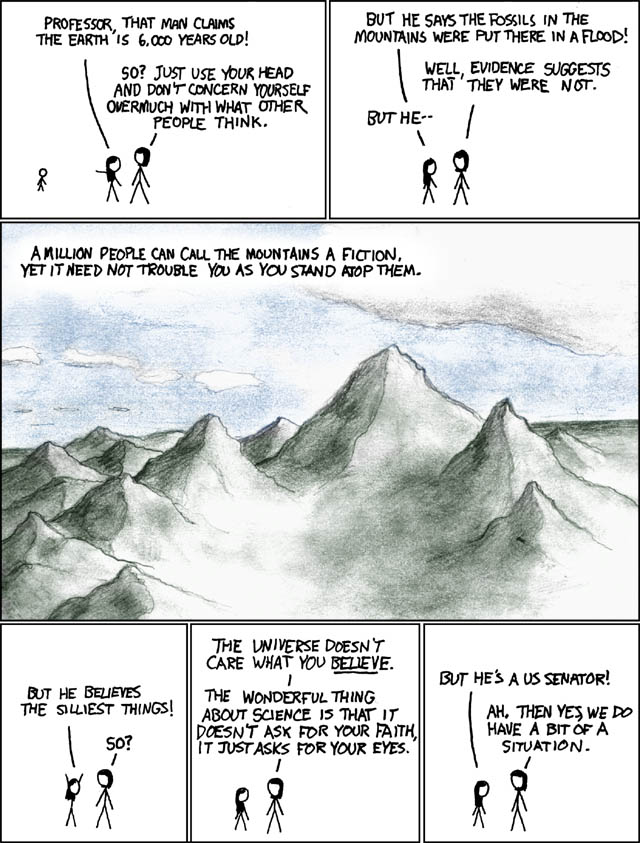 Seeing as both parties have now presented their closing statements I am locking the thread. Thanks to both ThePuppyTurtle and Hytegia for taking part.

The critique thread is, as always, open to further discuss the points raised in this exchange:
http://www.leagueofreason.org.uk/viewtopic.php?f=16&t=7189

Status
Not open for further replies.