#BIRNY #ElectoralReform -- Wouldn't it be nice if we could have more options to choose from in the general election, without having to worry about similar candidates splitting the vote between them and potentially handing the election over to something worse? 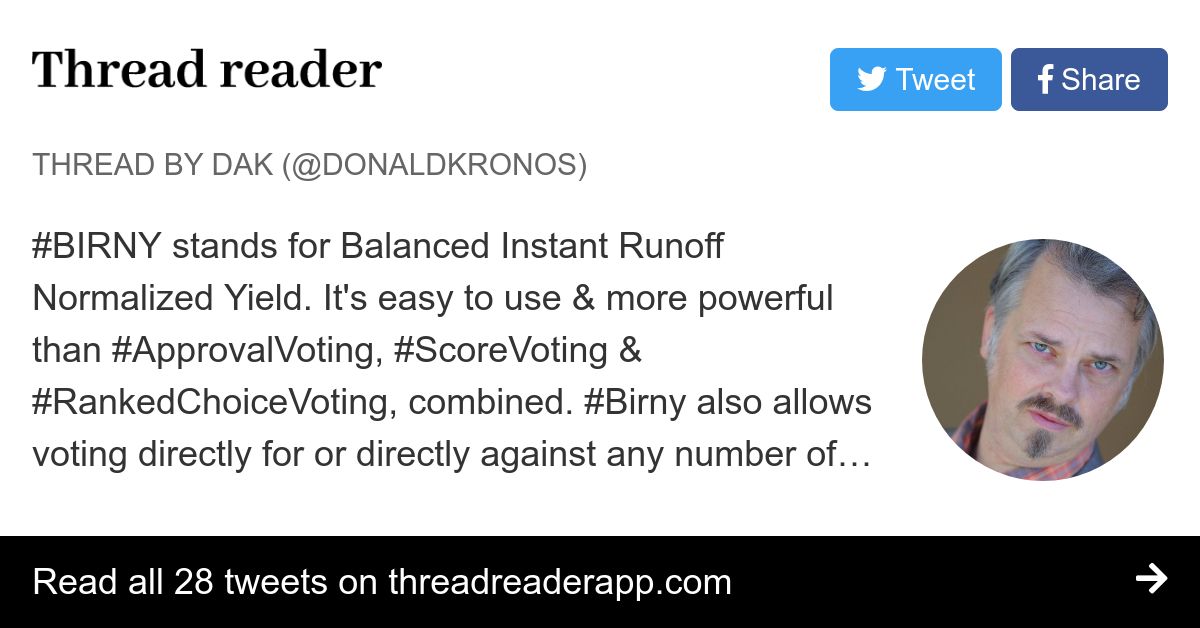 Thread by @DonaldKronos: #BIRNY stands for Balanced Instant Runoff Normalized Yield. It's easy to use & more powerful than #ApprovalVotinting & #RankedChoiceVoting, combined. #Birny also allows voting directly for or directly against any number o…

threadreaderapp.com
Introducing a powerful and versatile election system known as Balanced Instant Runoff Normalized Yield, or BIRNY for short.
With a BIRNY election, you could vote for ALL of the good candidates, instead of having to pick just one, and you could even opt to cast a vote directly against what you see as the absolute worst candidate, but your vote would never increase or decrease the relative chances of one candidate you didn't vote for or against beating any other candidate that you also didn't vote for or against, and your vote for the candidate you see as best would never increase the chances of the greater evil beating the lesser evil in the unlikely event that the final contest were to come down to a pair of candidates that you could honestly describe as such.
The BIRNY system can also allow voters to choose a familiar ballot style that would be computationally translated on their behalf into the native ballot of the BRINY election. So if you like score voting or approval voting or ranked choice voting, or even if you actually like first past the post voting, you could opt for a familiar ballot from such a system and get all of the benefits of that system with none of its disadvantages. Together, if we work at spreading the word, we could make such a system available to voters everywhere.
#NotMeUS #PassItOn #BIRNY
M

I have a similar idea of a fair voting system. I don't know if it amounts to the same thing:

Mithcoriel said:
I have a similar idea of a fair voting system. I don't know if it amounts to the same thing:

That is a type of instant runoff voting called ranked-choice voting. You actually described it quite well. The way it's done with ranked-choice voting is that your favorite would be marked as number 1, your second favorite as number 2, your third favorite as number 3, and so on. There are good things and bad things about that system. One of the bad things, for example, is that it does not allow you to represent a tie. That is, for example, that two candidates are both your second choice, or that two candidates are both your first choice above all others but equal to each other. Ranked-choice voting also does not consider your second choice until your first choice has been eliminated, which means that if your second choice is eliminated first you had no say in the matter even if your first choice is then eliminated second. #BIRNY does away with such problems but would allow the use of a ranked-choice voting ballot. If the voter opted to use a ranked-choice voting ballot, they rank their choices as 1, 2, 3, and so on, which would then be translated by the system into their multiplicative inverses so that your first choice would get the highest score, a value of 1, while your second choice would get the second highest score, a value of 1/2 oh, and your third choice would get the third highest score, a value of 1/3, and so on. In each round, all of your ranked choices would be considered. Alternatively, the voter could choose to use a more versatile ballot on which they could directly specify the score given to each candidate rather than having that score calculated by multiplicatively inversing rank numbers. You could, for example, give your first choice 50 points, your second choice 40 points, your third choice and fourth choice 10 points each, your fifth choice 9 points, and your 6th choice 3.5 points. It would be up to the voter how many points total they want to give out. Those points could be applied to votes for some candidates and potentially also vote against some other candidates. The total number of points given out by the voter would be considered one vote, no matter how much they added up to, so that their vote could be normalized mathematically to make it effectively exactly the same as if they had multiplied or divided every one of those numbers by a single specified positive value. For example, turning 50 points into 5 points, 40 points into 4 points, 10 points into 1 point, and 3.5 points into 0.35 points. Does that make sense to you? If you have any questions, please let me know.
M

Sounds good. So how do you vote against someone? Do you give them negative points?

Mithcoriel said:
Sounds good. So how do you vote against someone? Do you give them negative points?
Click to expand...

you vote against them by not giving our vote to them.

Mithcoriel said:
Sounds good. So how do you vote against someone? Do you give them negative points?
Click to expand...